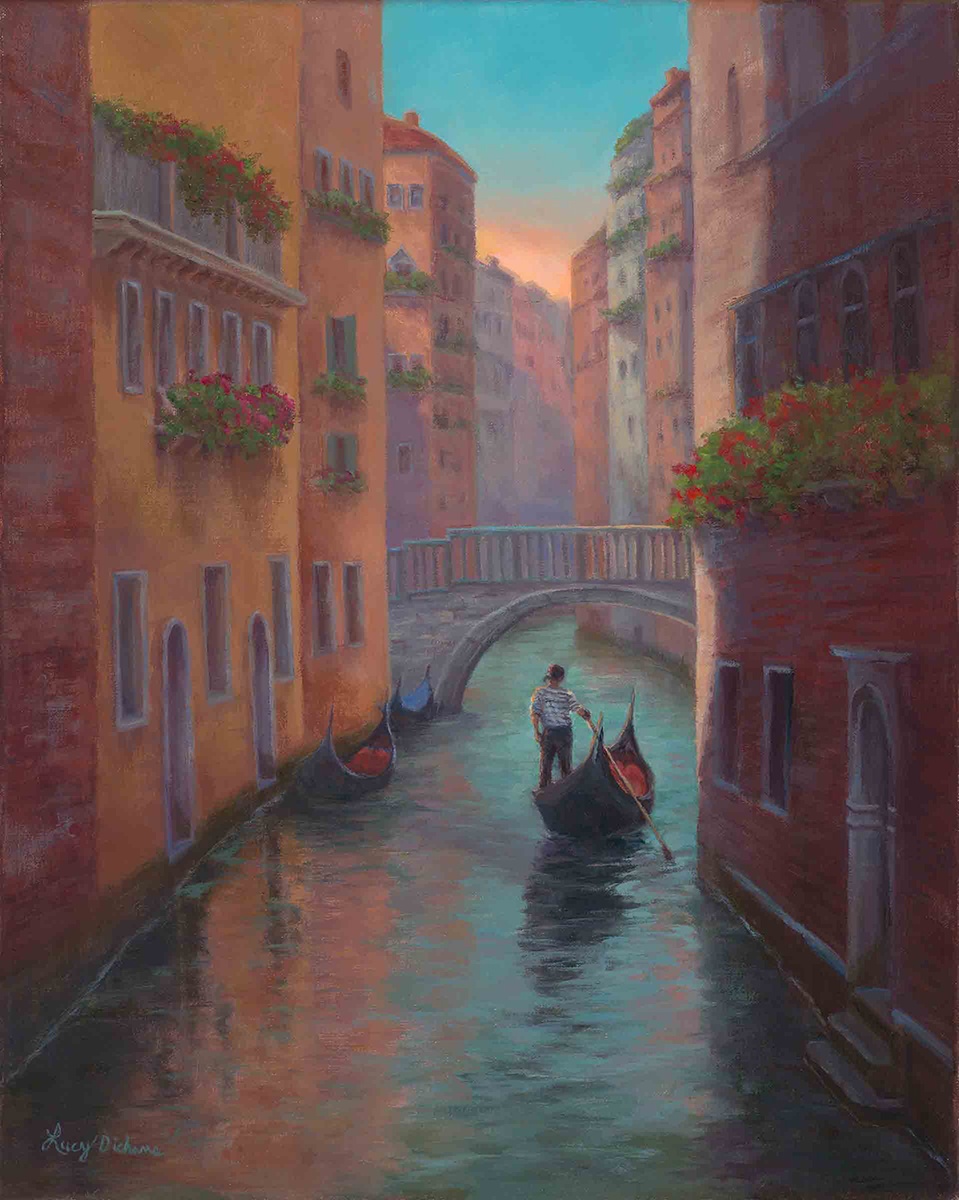 I have recently completed a special commission, capturing an anniversary memory for long time collectors Don and Linda in Venice. I am honored to be entrusted with this and a previous anniversary commission for them also! Don and Linda have graciously offered for this painting to be available as Giclée prints to you!

On a cruise to celebrate our anniversary, Don and I stayed in Venice for two days exploring this fascinating city. For our first night, Holland America arranged a gondola ride on the Grand Canal, and twenty other guests decided to join this excursion. Everyone waited in the queue to be welcomed on board. As we approached the front of the line, we were asked to step aside with a promise we would not be left behind. After all the others were escorted into the 8 seat gondolas, there was one small four-person vessel left. The tour guide motioned us into the plush seats on this very ornate gondola. As the procession began to leave the dock, a young man, carrying a music case, carefully found his way to the front of our gondola.  The wonderful music of the accordion began as we were gliding into the canal, and the musician began to sing several romantic Italian songs. As an encore, he sang one final song in English, weaving in words about our special Anniversary celebration. Such a wonderful surprise!  As our excursion came to an end, we decided to partake on an evening meal at one of the cafes in St. Mark’s Square. As we were strolling over a canal bridge, we noticed one lonely gondolier slowly rowing out toward the Grand Canal. Don decided to seize this opportunity to take a photograph as the young man began to slowly pass under a bridge while the setting sun made colorful patterns in the water below.  The following evening, we went back to the square to enjoy a special dessert from the gelato vendors. As we were strolling along enjoying our treat, we came upon a traditional event that occurs every evening during tourist season. Several bands perform at the various outdoor cafes around the perimeter so tourists can enjoy the performances as each band plays in succession. As we approached the third bandstand, one of the musicians called out our names! He was our performing gondolier, and we realized the photo Don captured the evening before was of Pedro as he left the docking station to begin his second performance of the night.  Some say Paris is the City for Lovers, but on this magical night, Venice became the City of Love for a very special celebration of our 45 years together.