Storm Before the Calm 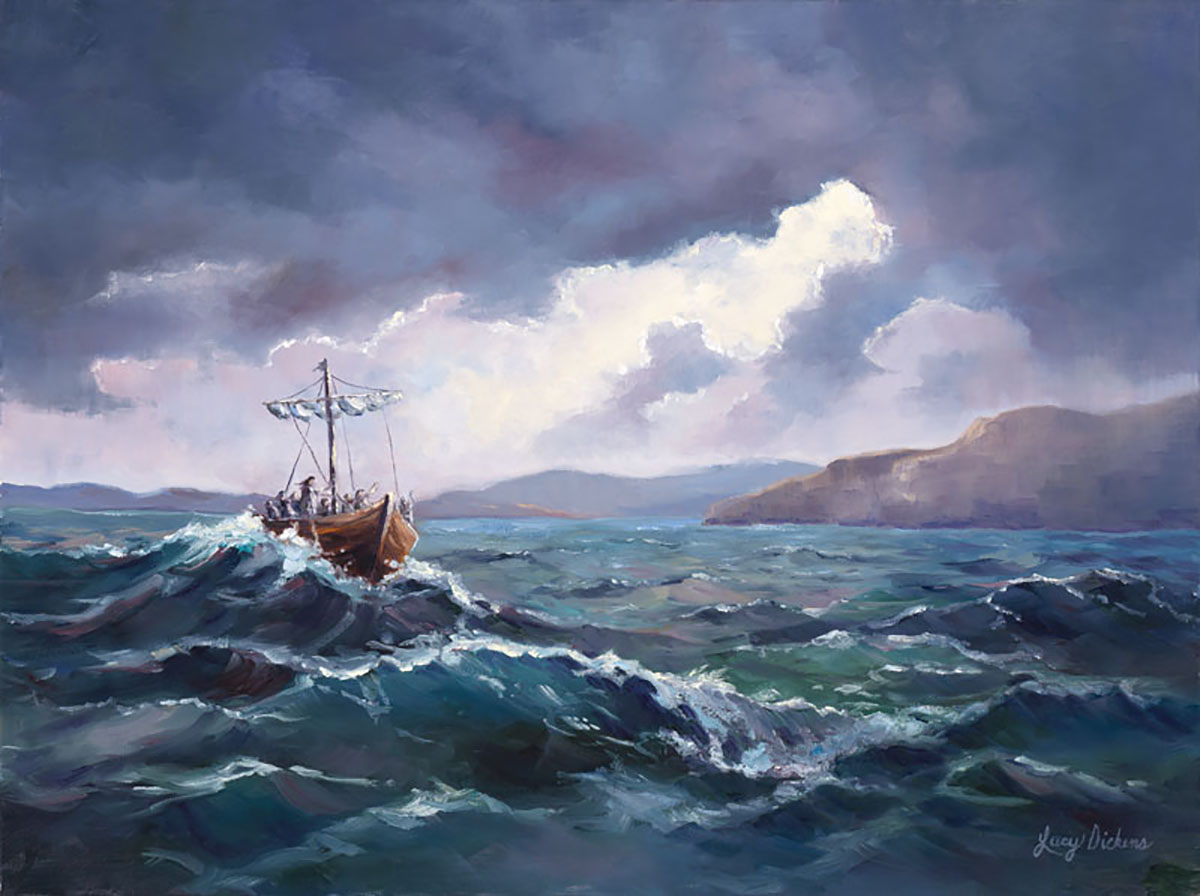 What comes to mind when you hear the words “Sea of Galilee”? For me I could not help seeing Jesus reach out to those disciples on the storm tossed sea. I found it impossible to paint the serene “Galilee” (above) without first focusing on the storm. Visions of turbulence played through my head and would not end. The Sea of Galilee is 13 miles long and 7 miles wide. The entire lake is in a great depression 700 feet below sea level (the lowest lake in the world) and is up to 150 feet deep. The peaceful calm of the Sea of Galilee can suddenly become transformed by violent storms. Winds funnel through the Galilee hill country surrounding the lake and stir up the waters trapped in the basin causing winds and waves deadly to fishermen.

In two different stories we hear about Jesus and the storms on this sea. The first in Mark 36-40 Leaving the crowd behind, they took him along, just as he was, in the boat. A furious squall came up, and the waves broke over the boat, so that it was nearly swamped. Jesus was in the stern, sleeping on a cushion. The disciples woke him and said, “Teacher, don’t you care if we drown?” He got up, rebuked the wind and said to the waves, “Quiet! Be still!” Then the wind died down and it was completely calm. He said to his disciples, “Why are you so afraid? Do you still have no faith?”

Next we learn in the Gospels another story, Mathew shares it this way: Immediately Jesus made the disciples get into the boat and go on ahead of him to the other side, while he dismissed the crowd. After he had dismissed them, he went up on a mountainside by himself to pray. Later that night, he was there alone, and the boat was already a considerable distance from land, buffeted by the waves because the wind was against it. Shortly before dawn Jesus went out to them, walking on the lake. When the disciples saw him, they were terrified. “It’s a ghost,” they said, and cried out in fear. But Jesus immediately said to them: “Take courage! It is I. Don’t be afraid.” “Lord, if it’s you,” Peter replied, “tell me to come to you on the water.” “Come,” he said. Then Peter got down out of the boat, walked on the water and came toward Jesus. 30 But when he saw the wind, he was afraid and, beginning to sink, cried out, “Lord, save me!” Immediately Jesus reached out his hand and caught him. “You of little faith,” he said, “why did you doubt?” And when they climbed into the boat, the wind died down.

Why do we continue in doubt and fear? Often I find as Peter did that when I take my eyes off Him and focus on my problems or circumstances I begin to sink further and further too. It can become a downward spiral of turmoil. Does He not call us to take our eyes of the mountains surrounding us and focus on Him, to step out in faith and to trust Him? Faith is action, how do we believe without stepping out of the boat? But it does not stop there. We must keep on walking not looking to the left or the right but eyes fixed straight ahead, eyes on the prize. Nothing is impossible for those who believe.