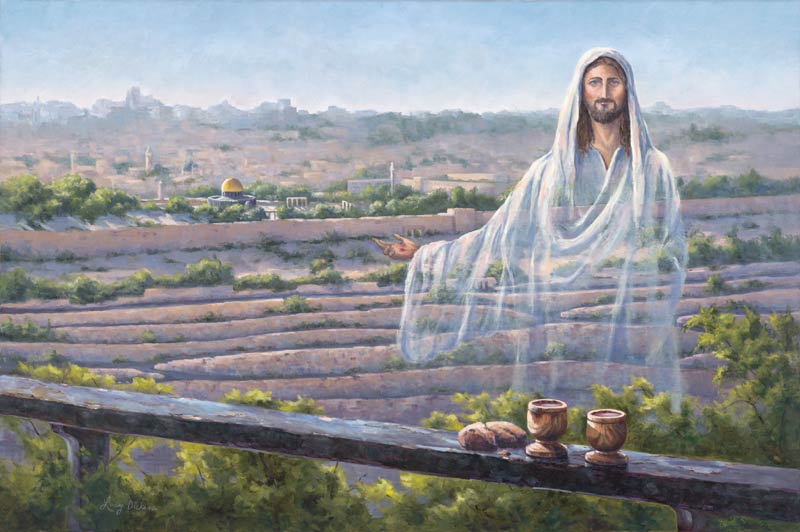 Before I share about Jerusalem, I must thank a special artist friend of mine, you know who you are. I sent this painting, prior to Jesus being added, and asked for his critique. I shared how profound this trip was for me and the significance of sharing communion while praying over Jerusalem. He “felt my fire” and challenged me transcend the “natural” world and say what I was really feeling, paint what I really “see”. Well I took him up on this challenge and added Jesus to the painting. While freeing, I must admit this is scary to me; could I do it? What would the reactions be? Many of you must know by now how important my faith is to me and see it reflected in my art and my words. Know this; never do I want to push my faith, only share my light, where my joy and inspiration come from, and to capture God’s amazing creation in brushstroke and within my stories. I strive to bring a sense of hope and encouragement through my work. I hope you really hear my heart in this…

Jerusalem
Has there ever been a place so filled with controversy and tragedy throughout the centuries? Three of the world’s largest religions, Judaism, Christianity, and Islam, lay claim to her and each trace their ancestry back through Abraham. The first Temple was built by Solomon on the site believed to be where Abraham was instructed to offer Isaac as a sacrifice as a test of faith, who God then spared (according to Islam it was Ishmael nearly sacrificed). This Temple was later destroyed by the Babylonians and the Israelites were taken into captivity. The second Temple was rebuilt under Ezra and Nehemiah as they returned. The third temple was built by King Herod which was destroyed by the Romans in AD 70. This site is also holy to Muslims as they believe this is where the Prophet Mohammed ascended to heaven at the end of his night journey. The Dome of the Rock, the gold dome you see in the distance, was constructed on the remains of the Temple Mount in honor of this event and there it remains today. Only Muslims may enter the Temple Mount, Jews and Christians have only a small portion of the western wall dating back to the second Temple period to pray and to mourn at, (often referred to as the Wailing Wall). Christians believe the messiah has already come, Jesus, who was crucified in Jerusalem and rose again on the third day. It is no wonder, tensions run high and the area has been fought over for so long.

Overlooking Jerusalem from the Mount of Olives was a profound experience. Located on this mount are Jewish burial grounds dating back 3000 years including Old Testament prophets and leaders. It is from here that Jesus rode a donkey into the city and here the disciples asked Him about end times. The Garden of Gethsemane is on the Mount of Olives where Jesus agonized after the Last Supper, before he was betrayed and crucified. With all of these thoughts and visions swirling in my head, we shared communion and prayed over Jerusalem, prayers for peace. God gave Abraham a promise long ago, that he would be a father of nations. His message throughout time and interwoven throughout the Bible is one of hope. It is one of redemption and forgiveness, one of reconciliation with God meant for all peoples and all nations. I felt His presence in that moment and now I share that experience with you.